I have made contributions in several fields, of which solving the mystery of the Ice Age extinctions is the most important. 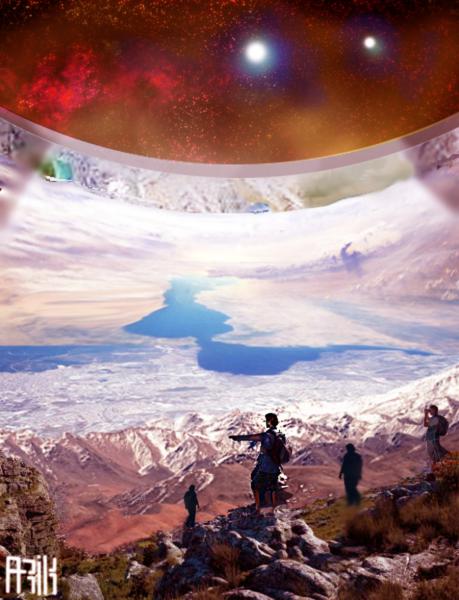 "South Pole Accelerator"
A vertical Mass Driver at the South Pole launches swarms of payloads to the edge of Earth’s sphere of influence, supplies IPMD. (1981)

"Starseed/Launcher (A Linear Accelerator for Interstellar Nanoprobes)"
An entirely new method of space exploration and development. Both the accelerator, and the space probes themselves, are novel. (1996)

"The Starseed/Launcher"
Appeared in the May, 1996 "prepress" issue ofNanoTechnology magazine.
A less technical account of the concept.

"Open Air Space Habitats", aka Bishop Rings;
A one-gravity, one-atmosphere type of Ringworld made of carbon nanotubes.
These were named Bishop Rings by the gamers of Orion's Arm in the late 1990's.
The eponymous ring installations of the Halo series, introduced in 2001, are essentially Bishop Rings.
Posted Aug 19, 1997

"The Interworld Rapid Transit System (A Transportation Network for the Solar System)"
(IRTS)- A variety of energy and matter beam generators in different places exchange with each other and with beam riders. This is the first proposal of its kind. Abstract posted Aug 19, 1997, draft article from 1997 (1967, 1981, 1997)

"Some novel space propulsion systems"
Micro-scale Light Sails, Mesoparticle Beam Propulsion, and Ultracold Matter Beam Generators (a new type of particle beam, 1999), Aircraft Engineering and Aerospace Technology: An International Journal, 75, 3, pp. 247, 2003. This was an invited article and the journal gave it an award. The content is mostly different from the previous article of the same title.

The Construction and Utilization of Space Filling Polyhedra for Active Mesostructures,  December, 1995
The first paper, describing XY Active Cells. These are a more complicated version of Bishop Cubes®.

A Proposed MNT Active Cell, 1996
This goes in to some detail on a nanotech version of the XY Active Cell.

A Description of a Universal Assembler,
Published in Proceedings of the IEEE Joint International Symposia on Intelligence and Systems,   1996, ISBN 0-8186-7728-7, Posted Aug 19, 1997. In addition to being a shape-shifting machine like the T-1000, an advanced version of my invention can also be used to manufacture other objects, including copies of itself.

"The Overtool: A Proposed Universal Assembler"

A proposed Universal Assembler- a self-replicating machine, which is also capable of manufacturing other products. An Active Cell Aggregate with atom manipulators assembles its own components and other structures. (1996)